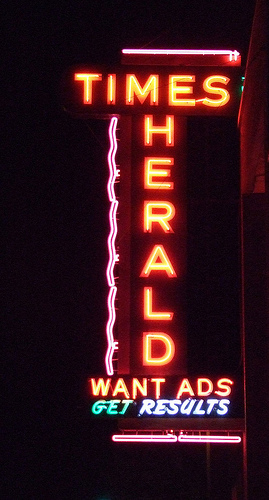 When was the last time you saw a roll of film? You know, the kind you load in the back of a camera.

Or newsprint from 1910? How about a printing press almost as aged?

You’ll have to clear a thick layer of dust to see it, but photography relics and dog-eared newspapers since turned yellow could be spotted around every corner and atop every desktop inside the Moose Jaw Times-Herald newsroom. 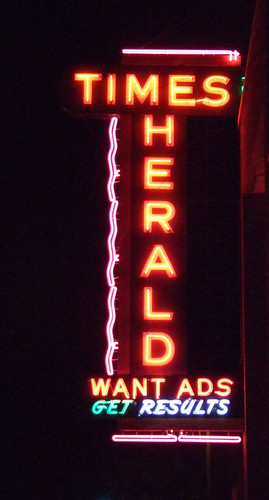 It’s the unmistakable charm of that yellow-bricked landmark with the large florescent sign hanging out front. You’d easily spot it just a block off Main Street in the city’s downtown core.

A newspaper was once the buzzing epicentre in any community. The Times-Herald was no exception. It was where the locals would catch up on the latest happenings in town. The reporters and editors were relied upon to be in the know on everything local – gossip or otherwise. Sadly, that’s not the case anymore in a world with virtual news sites and online chat rooms.

The Moose Jaw Times-Herald printed its final edition on Dec. 7, a collection of print and photo journalism sure to be a collector’s item and eventually destined for a provincial museum.

The first edition of the Moose Jaw Times was published on April 2, 1889. In 1906, it became a daily. For those keeping score, the Saskatchewan Herald (in Battleford) first published in 1878.

Keep in mind, this predates telephone communication and it definitely predates the Internet. Newspapers were once the lifeblood to communities. They were valued, respected and relied upon to tell the stories of the people living and working in those cities and towns, to hold those accountable, to document the history.

With regret, the Times-Herald is the newest casualty in the slow and steady death march of the newspaper. It late November it was learned Torstar and Postmedia, two of Canada’s largest media conglomerates, swapped ownership of dozens of Ontario newspapers and immediately shuttered most of them — close to 20 community papers gone.

A sharp decline in readership is the main culprit. In 1950, nearly every household in Canada had a newspaper delivered to the door. By 1970, it was one in two households.

That trend will worsen, as some project it to be one in 10 very soon.

Managing editors were asked to do more with less – meaning, fill the pages with local news, scale back expenses (ie: salaries), and do so with fewer staff.

It’s a familiar refrain in almost every newspaper in North America.

One has to wonder if and when the Regina Leader-Post and Saskatoon StarPhoenix – Saskatchewan’s two largest newspapers – will follow suit.

Moose Jaw as a city will surely survive without its community newspaper. But what kind of an existence will it be?

Many of the subscribers to that newspaper have received the folded newsprint in their mailbox for the past 70 or 80 years. They’ve read about civic politics, tax hikes, the Snowbirds, rotting water main pipes, the Civic Centre demolition, Colin Thatcher, a new downtown restaurant, the girl down the street who earned a university scholarship.

Those news stories and hundreds like them are begging to be told.

It’s always a sad day to learn of another newspaper that has stopped spreading the news.

Craig was the managing editor of the Moose Jaw Times-Herald from 2015-2016.